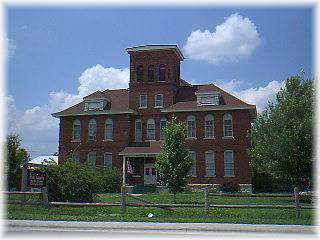 The North Ward Museum is housed in the North Ward Elementary School built in 1903 which was purchased by a local family and donated to the Historical Society of Polk County. Hundreds of objects and documents touching on area history are on display and stored in the Museum's archives. Exhibits occupy thirteen rooms and areas on three floors of the old school building.

Special features include a "school room," a veterans room, a toy room, an archives room, and a room honoring Ada McCracken, who taught at the school 46 years.

The most ancient man-made objects in the Museum's collections are arrowheads, tomahawk blades and hide scrapers that date back as much as 10,000 years with the appearance here of the First Americans.

A horsehair chair and sofa from 1815 predate Polk County's formation in 1835, and a bed in the McCracken Room was made the year the county was born.

Amongst the rarest of the Museum's holdings is a mourners' bench dating from the early 1800s. It formed a parenthesis on one side at the ends of a casket and was occupied by family members. On the grounds stands an authentic two-story log cabin which was erected in 1867. Oral history suggests the cabin was designed as a country store but was used always as a home. In the 1980s it was moved from its location in the woods between Bolivar and Aldrich in the southwestern part of the county.

Exhibits in the annex have been renovated to include a 1942 mural from the MFA Exchange, farm implements, and a mercantile counter from an old country store. Most of the old-time kitchen and farming implements still work, as does the rug loom. Demonstrations of rug-weaving are given on it regularly.

Historical books about Polk County are for sale at the museum.

Come visit us in Bolivar, Missouri

Things to do Museums near Bolivar, MO

Located in the James C. Kirkpatrick Library, displays are changed out every two months....