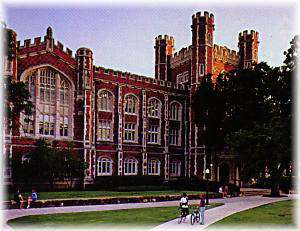 Several university programs and facilities, including the petroleum engineering, and weather prediction programs, are nationally recognized for their excellence. The Department of Botany and Microbiology has the largest regional resource for naive flora. With over 2.6 million volumes, the University of Oklahoma Libraries are the largest in the state and the Laurence S. Youngblood Energy Library is one of the top petroleum geology libraries in the nation.

Landscaping and architecture are highlights of the campus. No matter what the season, the north and south ovals are always decorated with intricate floral designs. Many of the buildings throughout the campus are designed in a unique "prairie gothic style of architecture.

OU has a long tradition of outstanding sports teams. OU athletic teams have won 19 National Championships and 160 Conference Championships and have produced 64 All-Americans and 43 Academic All-Americans. Additionally, six athletes have been named Conference Athlete of the Year and 13 players or coaches have been inducted into the National Football Foundation Hall of Fame. For athletic scheduling and ticket information, call the OU Athletic Ticket Office at (405)325-2424, the OU Media Relations Department at 1-800-325-8231.

For information about admission to OU or to arrange for a campus tour, call (800)234-6868 or (405)325-1188. Visitors can also drop by OU's Visitor Center in Jacobson Hall, located at the corner of Boyd Street and University Boulevard.

Listed on the National Register of Historic Places for its unique architectural style and its historic association with Native American fine art and culture, the Jacobson House is located in the former residence of Oscar B. Jacobson built in 1917. The center was opened in 1987

This gracious Queen Anne style house, built in 1900, was purchased by the city of Norman in 1971. Focusing on the history of Cleveland County from the Land Run of 1889 to Statehood in 1907, the house was placed on the National Register of Historic Places in 1985.

Built in 1929 for the new "talking pictures," the Grand Dame of the city is listed on the National Register of Historic Places and the Oklahoma List of Historic sites. The elegant Spanish Gothic theatre annually attracts some 20,000

Things to do Colleges near Norman, OK