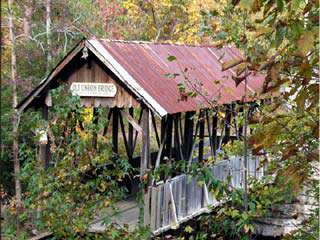 Things to do Historic Bridges near Mentone, AL

Pedestrian bridge offers a beautiful view of the Tennessee River on Pickwick Lake. Dated 1839, began as a toll bridge for tra...

Located just off AL Hwy. 75 in Blount County. Free admission. Built in 1935, this is one of the highest covered bridges in th...