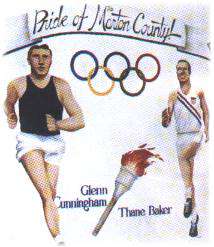 Glenn ran on the 1932 and 1936 U.S. Olympic teams winning a silver medal in 1936 in the 1500 meters. In 1938 he set an indoor mile world record with a time of 4.04.4 and was given credit for making the mile the glamour event in indoor track and was selected as the outstanding track performer in the 100 year history of Madison Square Garden.

The epitome of "True Winners", both on the track and in their everyday life, they are an inspiration to all.

The two large displays and oil painting by local artist, Julie Caffee, is a fitting tribute to their endeavors. Located at the Morton County Historical Society Museum.


Come visit us in Elkhart, Kansas

Things to do Famous People near Elkhart, KS