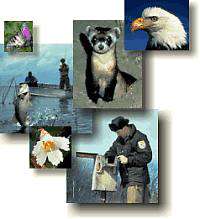 Located in the middle of the Oklahoma panhandle, the 4,333-acre Optima National Wildlife Refuge is made up of grasslands and wooded bottomland on the Coldwater Creek arm of the Army Corps of Engineers Optima Reservoir Project.

The panhandle area of Oklahoma is often referred to as "No Man's Land" because it was the last wild west frontier, making it a favorite location for outlaws. Homesteaders began settling in the panhandle in the mid 1880s and called the area Cimarron Territory. One of the earliest towns in the territory was Hardesty, founded in 1885. It was located about three and a half miles northeast of the present town of Hardesty. "Old" Hardesty was relocated in 1901. That same year, the railroad tracks were extended from Liberal, Kansas, to Texas and the town of Guymon was founded. Guymon grew steadily as did the other towns that sprang up in the area of the present-day refuge.

The refuge provides a winter home for migrating waterfowl, primarily Canada geese and mallards. Optima Dam was completed in 1978 but the impoundment never reached expected levels. To date the lake has never risen enough to flood any of the refuge lands. The intended purpose of the refuge was to provide migration and wintering habitat for the shortgrass prairie population of Canada geese and the high plains population of mallards, but the lack of water has reduced the potential for waterfowl management. The refuge does, however, provide an island of prime habitat for resident species such as white-tailed deer, coyotes, Rio Grande turkeys, quail, and many others. Because of its important habitats, Optima is a migratory stopover and summer home to many species of songbirds and raptors.

A variety of mammals are also found on the refuge including white-tailed and mule deer, bobcat, coyote, beaver, porcupine, black-tailed jackrabbit, badger, raccoon, and skunk. Reptiles include the prairie rattlesnake and the Texas horned lizard, commonly called the horned toad.

Recreational activities allowed include wildlife observation and archery deer, turkey, dove, and upland game hunting. Fishing is not permitted on the refuge.

The Oklahoma Department of Wildlife Conservation manages 3,400 acres of the project lands as Optima Wildlife Management Area along the North Canadian (Beaver) River. This entire area is open to public hunting. Public hunting is allowed by the Corps of Engineers on a portion of the reservoir and lands they administer around the reservoir.

The Corps has public use facilities at several sites around the reservoir. Lodging is available in Hardesty, Hooker, and Guymon.

Located in the middle of the Oklahoma panhandle, the 4,333-acre Optima National Wildlife Refuge is made up of grasslands and wooded bottomland on the Coldwater Creek arm of the Army Corps of Engineers Optima Reservoir Project.

The panhandle area of Oklahoma is often referred to as "

In addition to the 7700 acres of hunting provided around Optima Lake, Texas county draws many hunters throughout various seasons for execellent hunting opportunities.

Things to do Wildlife Refuges near , OK