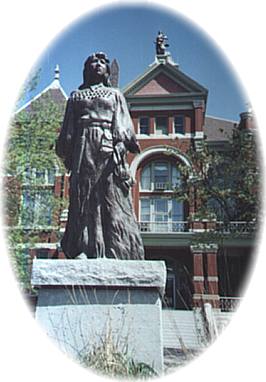 Ottawa is the current county seat of Franklin County. The town was named after the Ottawa tribe of Indians, in the heart of whose reservation the town was laid out. Indian ownership prevented settlement until the spring of 1864. Less than 20 years after Ottawa, in its early days gained fame in Kansas, as well as in neighboring states, as home of the Chautauqua Assembly. It was the second largest of its kind, established in 1883, and it brought to the Midwest a cultural program the enriched the lives of thousands of people. The assembly attracted such famous speakers as William Jennings Bryan; President, William McKinley; President, Warren G. Harding; President, William H. Taft and President, Theodore Roosevelt.

Visit the Old Depot Museum. This two story passenger depot was built in 1888 and today serves as a museum.

The Victorian-era mansions and buildings designed by the Famous Kansas Architect, George Washburn, who made his home in Ottawa for nearly 60 years, are truly magnificent architectural gems.

Located south of the old Ottawa Carnegie Library in Ottawa's City Park, the Dietrich Cabin stands today as a memorial to a courageous couple, who suffered severe hardships on the Kansas frontier and as a tribute to the hundreds of other early pioneers that settled in Franklin County.

The Old Depot Museum is operated by the Franklin County Historical Society. This incredible, two story, limestone depot was built in 1888

The entire 200 block of Main Street in Ottawa is listed on the National Register of Historic Places. It's noted for its Victorian architecture.

The Ottawa City Park is a beautiful compliment of nature's architecture among the historic works of George P. Washburn in the downtown district. Located at 5th and Main, the park offers a spacious area for strolling, relaxing, or picnics with playground equipment for the children.

Located northeast of Ottawa 2 miles north on U.S. Highway 59 and then east. The home was built in 1862 and is listed on the National Register of Historic Places.

To Ottawa calendar of events

Things to do near Ottawa, KS