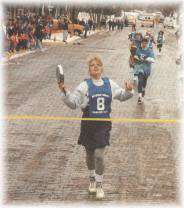 Newcomers to Liberal might be amazed to see people dashing down Kansas Avenue on a chilly winter morning, pancake skillets clutched tightly to their apron-covered chests as they race. But that just means it's Pancake Day, a holiday all of Liberal celebrates.

Pancake Day dates back to 1445. It all started in Olney, England, when one woman was busy preparing her pancakes and the bell rang to go to church to be "shriven" of her sins. She grabbed up her griddle and pancakes and ran in her apron to the church, becoming the first pancake racer.

Since then , Olney has declared Shrove Tuesday the official Pancake Day in England. Every year on this day, women from Olney race with skillets and pancakes to the church, just as it was done in 1445.

In 1950, the Liberal Jaycees contacted the Rev. R.W. Collins, Vicar in Olney, to propose an international competition. Since then, Olney and Liberal have raced against each other, keeping a running score of race winners.

Over the years a three day celebration has grown up around the event in Liberal. The festivities include a pancake feed, eating and flipping contests, musical programs and a talent show. Other activities, including old-time artisans displaying their crafts and the Miss Liberal pageant are included in the weekend's events as well.

Things to do near Liberal, KS