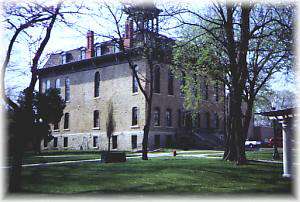 Parmenter Hall with its distinguishing tower, is the first building actually built on the Baker University campus and is listed on the National Register of Historic Places . The cornerstone was laid in June, 1866, but lack of financing delayed completion until 1881, although Baker University moved in in 1871.


President Linclon gave $100 toward the construction of this native sandstone building. It was also the site of Baldwin's first electrical generating plant.