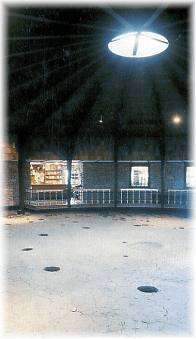 This Kitkehahki (Republican) village was inhabited in the 1820's and consisted of 30 to 40 lodges with a population of over 1,000. The village was visited in 1826 by famed mountain man and explorer Jedediah Smith, who was on his way west with a party of trappers.

Twenty-two lodge sites are visible in the six acres enclosed with the fence. The original village is known to have extended further to the south. Surrounding it was a protective wall of sod and timber needed as the Pawnee were at war with almost every other plains tribe. Most of the lodges were 30 or 40 feet in diameter, but two were considerably larger. One of the larger lodge sites, presumably the home of an important family, was selected for this museum, which was erected in 1967. The original floor now exposed within the museum building measures 50 feet in diameter and has an area of almost 2,000 square feet. Visible on the floor are the remains of burned timbers from the collapsed walls, and the post holes in which the roof and wall supports stood. Near the hearth, which still contains ashes from the last fires, are two holes in which crane posts probably were placed to hold cooking pots over the fire. On the west side is a bison skull, badly damaged by fire, recovered from the altar of an adjacent lodge which has been placed where the altar of this lodge would have been.

In the south part of the floor is a large storage pit. This was probably lined with bark or thatched grass and contained corn, squash, dried meat and other foods. On the floor, exactly where they were found, are remains of stone, bone and metal tools which were left in the lodge when it was abandoned. Included are bone hoe blades made from the scapula of a bison, arrow shaft smoothers made of sandstone, and metal trade goods including an ax, hoe blade, knife blades and arrow points. There are also several parts from a typical trade gun of the period. Sections of mussel shell and bits of corn, shelled and on the ear, remain scattered over the floor, also as they were found.


Come visit us in Republic, Kansas

We currently do not have any events for Republic, Kansas in our database. If you know of events taking place, please add the event
.

Things to do Museums near Republic, KS