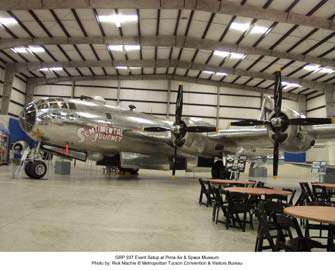 The Pima Air & Space Museum is the largest aviation and space museum west of the Rockies. Experience a century of aviation and explore over 275 aircraft on our grounds. Exhibits from pre-Wright brothers to space travel.

Visit the Challenger Learning Center of the Southwest and the B-17 390th Memorial Museum.

Come visit us in Tucson, Arizona

Tohono Chul Park is the Southwest's center where nature, art, and culture connect in 49

DeGrazia Gallery in the Sun

Discover Tucson's legendary landmark of art and architecture created by Ted DeGrazia. See Southwestern paintings, ceramics, bronzes, serigraphs, lithographs and more by the world-acclaimed artist. Explore the 13-room adobe gallery, Mission in the Sun, and cactus courtyard on a 10

Things to do Museums near Tucson, AZ

The Chiricahua Regional Museum houses many artifacts and exhibits of the area, as well as the Chiricahua Apache Indians, thei...

The Eastern Arizona Museum and Historical Society in Pima operates an ever-expanding facility. One area of the museum feature...

In 1914, the Nogales Volunteer fire Department pitched in and built the Old Town Hall on Grand Avenue, which is now home to m...

The Pioneer Home is listed on the National Register of Historic Places and stands as a memorial to the early pioneers....