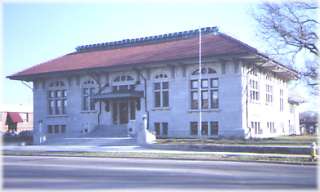 The Pittburg Public Library, listed on the National Register of Historical Landmarks, is an example of the Prarie School of Architecture. Built in 1910 by Andrew Carnegie, it is the only Carnegie library not bearing his name on the exterior. Since Carnegie was anti-union, Pittsburg Unions protested the city's accepting his donation. "You might as well put a skull and cross bones in the stained glass windows," one Pittsburg woman said. However, Carnegie acceded to the city's wishes and built the library without his name.

Pittsburg has enjoyed the use of a public library since 1902. The Carnegie building, dedicated in 1912, currently houses over 72,000 items. In 1994 a special bond issue was passed to build a 14,000 square foot addition and renovate the Carnegie building. The addition features a ground-level entrance, meeting room, elevator, children's department and adult collection. The renovated building will house staff areas, reading room, seminar room and genealogy section.

Come visit us in Pittsburg, Kansas

Things to do Carnegie Libraries near Pittsburg, KS