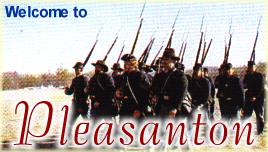 Pleasanton, established 1869, named for General Alfred Pleasanton, (and the town mis-spelled his name) who led defeat of Confederates at Mine creek.

Revered outdoorsman, lecturer, and writer, Enos A. Mills was born on a farm near Pleasanton on April 22, 1870, where he lived until age 14 before setting out for Colorado's Long's Peak. Known as the Father of Rocky Mountain National Park. Mr. Mills lectured throughout the East, lobbied in Washington and visited newspaper editors which brought about the passage of a bill by Congress on January 26, 1915 creating the 25 mile expanse which is now the Rocky Mountain National Park.

Things to do near Pleasanton, KS

The third largest producer of packaged ice with tours available by appointment....

The Girard Golf Course is a nine-hole, grass green municipal golf course maintained for public use. ...