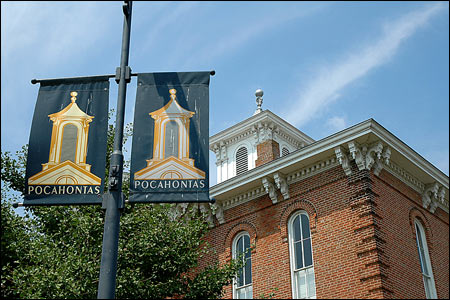 With a recorded history that predates territorial days, the Pocahontas (pop. 6,518) region is well represented in publications that list Arkansas "firsts." While most of the county's early events are centered around its historic port towns, there are several other places of interest to travelers. Old Davidsonville State Park, a few miles down the Black River from today's Pocahontas, received Arkansas's first U.S. post office in 1817 and the territory's first federal land office in 1820. While Davidsonville was making its mark on history, another village was taking shape upstream. Bettis Bluff was named for its first settler, Dr. Ransom S. Bettis, and when Randolph County was created in 1835, the little port town was named the new county seat. It also received a new name: Pocahontas.

In its early days, the Old Southwest Road brought commerce and travelers to the area. Several famous frontiersmen, including Sam Houston, Stephen Austin, Gen. U.S. Grant and others, also traveled the trail. For many, Pocahontas was the first supply stop in Arkansas. It is no wonder that many of Pocahontas' tourist attractions are rooted in this era. Nearby Maynard is home to the Maynard Pioneer Museum and Park which includes an over 100-year-old cabin filled with antiques from the 1800s, as well as three pavilions, playground equipment and RV hook-ups. Wilderness Valley Ranch provides overnight guided horseback rides, hay rides and buggy rides with a natural camping experience.

Today, Pocahontas retains its historic downtown business square and beautifully restored 1872 Victorian Italianate courthouse. Most of the commercial outlets facing the square have been renovated to compliment the stately courthouse. The new Imperial Dinner Theatre offers live stage productions paired with an exquisite meal for a rich dinner theater experience. The Studio for the Arts, located in the former Imperial Theatre, provides drama, ballet, art and voice training for all ages.

Randolph County is the only county in Arkansas to claim five rivers and one lake and water sports factor heavily in the recreational opportunities available to residents and visitors. The Black River, the local river on which the town grew up, presents anglers with excellent big-bass fishing. The Current River's strength is canoeing, although bass, bream and crappie fishing is consistently productive for fishermen. With 23 miles of navigable stream between Mammoth Spring and Hardy, the Spring River is the state's most reliable paddling stream. Its waters run cold and swift the entire year. Excellent fishing is also available in the Fourche River which empties into the Black River about 500 yards east of the city. The Eleven Point River's small-mouth bass fishing and good duck hunting extend along the river's 40 miles of floatable waters.

Food Service/Picnic Area Available Directions: U.S. 63 To Black Rock, then north on Ark. 361 for 6 miles to the park. South of Pocahontas, 9 miles on Ark. 166 to park 180-acre historical state park that interprets and preserves the town of Old Davidsonville; 12

Seating Capacity: 100 Non-Smoking Area Available Entertainment/Bar Available Type of Service: Banquet After many seasons in a refurbished 1940 movie house in downtown Pocahontas, the theatre has moved to a modern facility along U.S. 67, south of town in 2004

To Pocahontas calendar of events

Things to do near Pocahontas, AR

The Bethel African Methodist Episcopal Church is the oldest church structure in town; listed on the National Register ...

Granddaddy of all the big Ozark lakes. A 550-mile shoreline offers a wide choice of resort accommodations and the action is n...