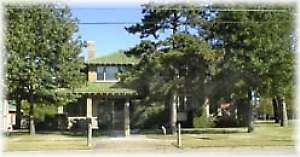 Anthony Godance Soldani built his dream home at a cost of $92,000. George J. Canon was the architect and the house was built by O.F. Keck. The green glazed roof tile was imported from France. Interior woodwork came from walnut trees on Soldani's Osage County Ranch and was specially milled in Kansas City. Other features include tiled fireplaces from England and imported tile floors in the basement. One charming aspect of the house in the "courting room" tucked under the gracious staircase. In its heyday, the Soldani house was a gathering place for the young people of Ponca City. Anthony Soldani died in 1956 and his wife passed away three years later. In 1966, the Ponca City Art Association purchased the home.