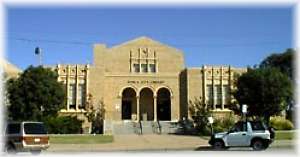 Housing much more than books, the Ponca City Library is home to the unique Oriental and Western art collection of Richard Gordon Matzene. A commercial photographer and art collector who lived in Ponca City for more than thirty years, Mr. Matzene obtained many fine painting and art objects during his eight trips around the world. Upon his death in August of 1950, the library became the recipient of his magnificent collection.

about Oklahoma by Oklahoma authors.

The charming bronze, "Through the Eyes of a Child" by Jo Saylors a Ponca City artist, is located at the west entrance.

Held the third Saturday of every month, the public is invited to attend these fun dances geared towards senior citizens....