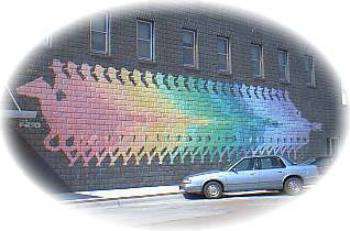 The Pony Express galloped through the West in 18 short months before Nebraska gained statehood. The historic value of those early times is being preserved in Gothenburg, which was named Pony Express Capital of Nebraska in 1991. Pony Express riders gallop across the Gallagher building in a mural featuring horse and rider in 24 rainbow colors. The high school art class painted the mural in 1981 with assistance from a grant by the Nebraska Humanities Council and a Lincoln artist. The horse and riders now serve as a service marked logo used by the Chamber of Commerce to promote tourism.

Things to do Arts near Gothenburg, NE