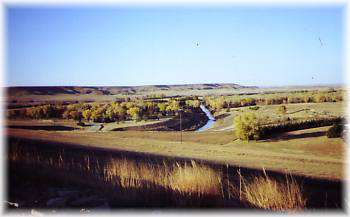 The Post Rock Scenic Byway is, without a doubt, one of the prettiest drives in the State. It runs the 16-mile stretch along highway 232 from I-70 to K-18 near Lucas. Driving along the byway you will be able to see for miles from the top of the Smoky Hills and experience the natural beauty of the area. There are rows of "Post Rock" fences and several buildings made from the native limestone.

The limestone is the crust of an old seabed. It is 6'-8' under the ground and is in a layer about 8" to 12" thick. In places you can see outcroppings of the stone in a hillside. The limestone was used for building material in the early days, because of the lack of trees in the area. Other rock formations in the area are Dakota Sandstone and Shale.

As you continue along the byway you will wind around Lake Wilson, the clearest lake in Kansas. Lake Wilson is a great recreation lake with everything from fishing, to wind surfing and bird watching. The byway is short but very diverse in scenic quality, which makes for an interesting drive. The Czechoslovakian people used the same route to migrate from the Wilson area up into Osborne County.

Things to do Scenic Drives near Lucas, KS