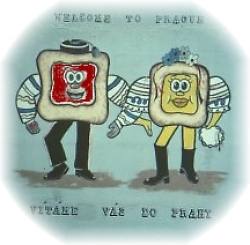 This has been the attitude of the city of Prague to visitors and settlers alike since was founded in 1902 by a predominance of Czechoslovakian pioneers.

In 1891, four Indian Reservations were opened to settlement in the north central Oklahoma area. A group of Czech people were among the pioneers who made the run. There are still descendants of these families living in Prague: Barta, Eret, Vlasak, Bonty, Simek and many others. The land on which the town is built originally belonged to Frank Barta and Anton Simek. In 1902, the Townsite Company bought this land.

Neighborhood centers were soon established where the essential staple groceries could be purchased. Crude methods of transportation without roads made it necessary for a railroad system. The Fort Smith & Western was looking for a place to put a coal chute. Their first choice was 2 miles East of Prague, but the landowner, Mr. Lee Watts, placed a much higher price on the land than the railroad was willing to pay. Hence, the railroad looked further west and was welcomed by the settlers of the Czech community.

The town was on its way and Mrs. Barta was given the honor of naming it. She immediately called it Praha, in remembrance of her home in the Old Country. Later Squire Vlaska changed the name to Prague.

Prague can boast of having one of the cleanest and neatest cities in our part of the state. They are proud of their Czech heritage. The population is approximately 2,300 with a trade area of 3,000. Visit the Prague Historical Museum, or walk the meditative grounds of the National Shrine of the Infant Jesus of Prague at St. Wenceslaus Catholic Church. The 300 year old shrine was re-established here when Prague, Czechoslovakia fell behind the Iron Curtain.

Things to do near Prague, OK