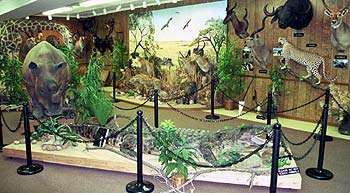 The museum was established to honor Mr. Shatto's life long interest in the outdoors and wildlife conservation. All of these exhibits were collected by either Mr. Shatto's grandson's or Mr. Shatto's son-in-laws father, Mr. Hollis Massey. Exhibits include wildlife specimens collected from across Texas, Mexico, the United States, Alaska, Canada, New Zealand, Australia, and many different section in Africa including the nations of Botswana, Zimbabwe, and South Africa.

Mr. Shatto's family hopes that the Museum will not only serve as a memorial to his lifetime interest in wildlife and wildlife conservation, but it will promote further the extreme importance of habitat preservation, strict enforcement of game laws, anti-poaching controls, enlightened environmental standards, and a general public appreciation for the beauty of nature as demonstrated by the preservation of these treasured species.

John Johnson has created a model of Cameron that recalls the town as it looked during the 1940s. For more than 25 years, Mr. ...

Made of unusual Tabby construction, the Dilue Rose Harris House Museum is as important for its architecture as for the person...

The historic Fielder house is a brick prairie-style house built in 1914 as the home of Arlington community leader James Park ...

This small, but rich, museum focuses on the history and culture of the Czech people, and to assist the public in understandin...