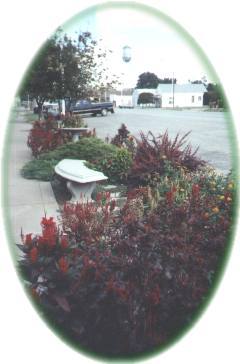 Protection, located in the western side of the county just off the highway, swells almost to overload every five years when alumni are invited back for a Protection High School reunion. Folks come from the far ends of the earth for this friendly little town's festivities. An annual community FunFest has recently been organized. Protection also boasts a nine-hole grass greens golf course, situated on the east edge of town.

Once called the "Biggest Little Town in Kansas," where "push and sociability are the characteristics," Protection has remained the second largest town in Comanche County since the 1890s.

The town originated in the summer of 1884, and after several meetings its charter was filed in Topeka, October 29. The name Protection had apparently been chosen as a name when the post office was opened; but, as to the meaning behind the unusual name, several stories have surfaced over the years. One referred to the safety at a fort during an Indian scare. Other reasons were based on Protection's location. With creeks on two sides, the site was said to be protected from prairie fires. The origin of Protection's name is most often linked with a protective tariff which was a much discussed issue in the 1884 presidential campaign.

Stan Herd spent his boyhood in Protection and the influence of his early farm life and love of the outdoors shows up in his murals painted throughout Kansas on the walls of city buildings in the small towns for all visitors the see while passing through.

When the original First Baptist Church of Protection was built in 1908, it was a wood frame structure that was the largest and best in the country at that time. In 1953

The Protection Golf Course has nine all grass greens and tee boxes.

These metal collages form two gateways between the fencing in rural Protection east on Highway 9.

To Protection calendar of events

Things to do near Protection, KS

Fishing ponds are open year round at the Cimarron National Grassland with light to moderate use. Winters are moderate, with s...