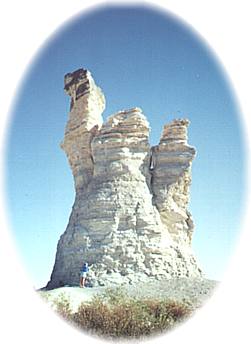 The Kansas Branch of the Union Pacific Railway was built through Gove County in 1868. Midway between Collyer and Buffalo Station a side-track called Me-lo-te Switch was established in 1879. In the summer and fall of 1885 a land company purchased the land for a town site at Me-lo-te, platted the town and called it Familton in honor of one of the members of the land company, Wm. Familton of Omaha.

In 1885, John and Benjamin Ikenberry and W.H. Wigington, of Dodge County, Nebraska, came looking for a location for a colony of Brethren. The colony came the next spring, May 1886, by covered wagon and each bought a quarter section of land from the I.B.Chase land company. Coming back the next spring they discovered the title to the land was not good. They had no land and someone else had the money they had paid down. Reverses came when the proposed plans for the north and south railroad collapsed, and the Chase Land Company disappeared like water evaporating.

A new town company was organized and they finally straightened things out. The Post Office Department at Washington refused to accept the name of Familton for the post office, so the name Rushton was submitted and turned down, then Fremont was suggested but was not acceptable. At the time a nephew of Elder James B. Quinter, a minister in the Church of the Brethren suggested the new town be called Quinter for the noted elder. This met with the approval of all concerned, and the town and post office became known as Quinter. The first depot was a boxcar set on the siding a little way east of where the permanent depot was located in 1887.

We currently do not have any events for Quinter, Kansas in our database. If you know of events taking place, please add the event
.

Things to do near Quinter, KS