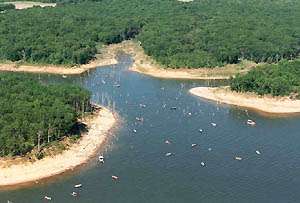 
Come visit us in , Iowa

The information below is provided by the Corps. of Engineers - thanks for the great information. Fishing Rathbun Lake is an 11,000

Many Rathbun Lake visitors have shown a growing interest in land based recreation activities. "Off the beaten path" opportunities may be found in the designated trails located on public lands adjacent to Rathbun Lake. Rathbun North Shore Trail

Low water conditions in the mid-2000's had a negative influence on crappie production in those years. The lake refilled in the spring of 2007 and a large year class of crappies was produced. At this time these fish are running between 7 and 8 inches. These fish should begin to reach 10

Rathbun Lake offers many opportunities for a variety of game. Deer, pheasant, quail, turkey, duck, geese, rabbit and squirrel may be found on public hunting lands.

We currently do not have any events for , Iowa in our database. If you know of events taking place, please add the event
.

Things to do Fishing near , IA

Low water conditions in the mid-2000's had a negative influence on crappie production in those years. The lake refilled in th...