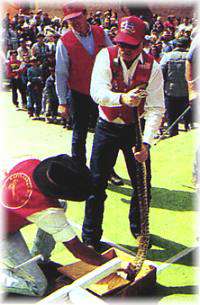 If you have no interest in rattlesnakes at all, don't fret. There is "something for everyone" at this Derby Weekend. The Flea Market includes more than 500 dealers, about 100 of those serving all kinds of food, including southern-fried rattlesnake at the Bite Back Cafe. There is also a rattlesnake shootout, a 5K run, a square dance, and a Big Country Dance featuring country/western music. The National Guard Armory is bursting with hand made items from all over the southwest, and the kids will no doubt burn a couple of hours at the carnival with games and rides. The "crowning moment" of the derby will take place as the Miss Derby Princess takes the throne and is forced to pose with the snake award winners and their record snakes.

Back to Snakes ... Experienced guides provide the proper equipment, train you, and then lead you down to the hunting areas where the slithery creatures reside. Once you descend into the snake pit, it's bite or be bitten--and you had better be the one who's eating. If you are lucky and prove your dominance over a nice booty-shaking rattler, you may walk away with a cash prize in the Derby Competition for "Largest Snake" or "Most Pounds of Snakes." The competition is presided over by the Derby's Fangmaster. But be warned: don't allow yourself to get TOO carried away in a valiant attempt to win the third and final category of "Most Snakes," or the recurring nightmare that plagued your childhood just might become reality. (A couple of hollow fangs sink into your flesh and inject you with venom. After you are pumped full of juice, the snake releases its grip, allowing you to thrash about a bit or run as the bitten area burns, while the rattler's venom pre-digests your flesh, until you can no longer move.) But that won't happen, right? Right?

For those still interested in overcoming old anxieties, but who would rather not experience the terror-rush that accompanies squaring off against a poisonous serpent, make your way to the southwest corner of the downtown square. There you will find literally hundreds of rattlers in open-air pits, which you can approach within inches and still be perfectly safe. There will also be bus tours leaving every hour on the hour to observe live rattlesnakes in the wild. This is the perfect photo-op for all you big talkers who feel that sitting in a bus is as close as you need to be; all you need to do is snap a picture which can serve as a future prop to embellish your tall rattler tales.

At the big red-and-white striped tent, you can enjoy professional snake handlers hosting continuous shows starring pythons, alligators and other exotic critters. When you've experienced enough live action, head over to the Butcher Shop Show and learn how rattlesnakes are processed for food, leather and medicine. (Tastes like chicken.)

Oh yeah, we thought you might be interested in an additional tidbit of information. The snake hunts its prey by using the heat-sensitive pits located just below and in front of each of its eyes. These sensors help it zero in on warm blooded animals in the dark. So, when you are cuddled up in bed at night after a long day of rattlesnake events, if you feel a tickle between your shoulderblades, don't worry, it's probably just your imagination, right? Right?