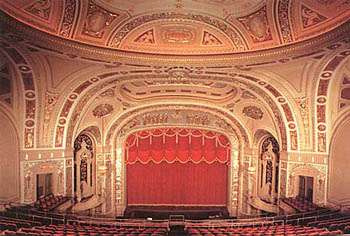 The Rialto Square Theatre is an historic Vaudeville Movie Theatre listed on the National Register of Historic Places offering a wide variety of performances.

"RUBENS RIALTO WONDER THEATRE" opened as one of the ten most beautiful theaters in the nation. The building reflected Greek, Roman and Byzantine architecture. Above the main entrance on Chicago Street rose the grand niche - the 100' "I" signature.

The construction of a "vaudeville movie palace" in Joliet, Illinois was the undertaking of the six Rubens brothers. The Royal Theatre Company was formed to guarantee the 2 million dollar project. With the opening of the theatre on May 24, 1926, the Royal Theatre Company leased the operation of the theatre to the Great States Theatre, Inc. The property remained under the control and direction of the Rubens brothers.

he Rialto's magnificent European architecture is the signature work of the late Eugene Romeo, a Sicilian immigrant who settled in Park Ridge, Illinois. Romeo joined the McNulty Brothers Company of Chicago, one of the largest plastering firms in the country.

A sampling of buildings in the Chicago area which bear his work include the Board of Trade, Chicago Daily News Building, Soldier Field, Merchandise Mart, Blackstone Theatre, Wrigley Building and the Joliet Township High School Auditorium.


Come visit us in Joliet, Illinois

Cruises on the Illinois River from Joliet to Ottawa aboard a luxury yacht with full bar, clean restrooms, 2

To Joliet calendar of events

Things to do Historic Theatres near Joliet, IL