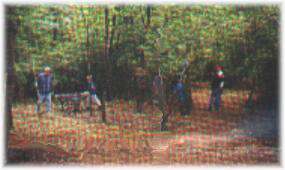 Established by John Water Riggs, the Riggs Arboretum at Waterloo is perhaps the oldest and least known arboretum west of the Mississippi River.

The property is in essence a large (10 acre) grove of trees, most ranging in age from 75 to 100+ years. There are no remaining structures although foundations and other evidences exist in sufficient detail to allow documentation of locations of the residence, horticultural buildings, processing areas and other facilities of the working nursery, circa 1910.

The grove yet contains many of the first trees of type to be introduced in the state and several which were also among the first nationally. The grove also contains three of the state champion large trees; a Yellowwood, a Loblolly pine and a Laurel oak, which were early introductions from the native forests toward the east.

Although generally overgrown, the grounds contain a network of walking paths, some of recent construction, which allow pedestrian circulation for observation of specimen, trees, many of which are over 100 feet tall.

Things to do Arboretums near Kingman, KS