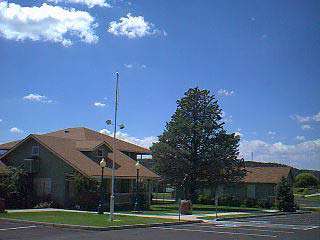 The Exhibit Hall is a replica of the two story Herron Hotel. Considered the "Hilton of Payson", it was lost to fire in 1918.

Adjacent to the Herron is Payson's original Forest Ranger's Station, built in 1907. It is believed to be the oldest station still standing in the West. The front interior has been furnished to represent the early days of the Forest Ranger, and the back serves as our library for local history.

On the grounds is the top portion of the Mt. Ord Firetower also Payson's first fire fighting equipment and fire truck. A bronze memorial statue honors those fire fighters who've lost their lives protecting our forest and our lives.

Novelist and screenplay writer, Zane Grey, became a part of Arizona legend and history. Many of his books were written here against the phenomenal beauty and ruggedness of the Mogollon Rim. Through his writing he brought to many the passion, excitement and quietude of this extraordinary area.

We have an excellent presentation on Zane Grey including many of his personal items such as chaps, saddle, guns, books and posters. The Rim Country Museum is in the process of recreating the Zane Grey cabin, which was destroyed in the Dude fire several years ago. Any parties who would be interested in contributing to this worthwhile activity should contact the museum directly.

The museum has a bookstore and gift shop and guided archive searches are available by appointment.

Things to do Museums near Payson, AZ

The Show Low Historical Society Museum is located in the former police department. There are nine rooms with many permanent a...

Gila County Historical Museum was once used as a rescue station for the old Dominion Mine from 1914 until the 1960s. The muse...

In a special wing of the new meeting house for the Springerville and Eagar Third Wards of the Mormon Church visitors will fin...

The Taylor Pioneer Museum was opened July 5, 1996, in a Pioneer Home built in 1930 by volunteers. A highlight piece of the mu...