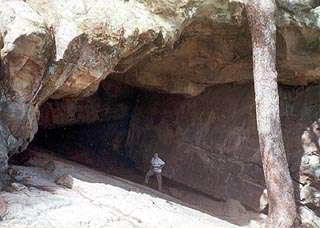 Once the home of prehistoric tribal groups, the area later became the hunting ground for Caddo and Osage Indians who then traded with the French fur trappers that began making their way through the area. Outlaw legends began to grow around a robbers' cave during the Civil War when deserters from both Union and Confederate forces used it. After the war, guerilla bands and gangs of robbers made it a rendezvous between raids. Down nearby Fourche Maline river ran what came to be known as "Robbers' Trail" - associated with such names as the Youngers, Frank and Jesse James, and Belle Starr (who had a cabin 20 miles to the north). The cave's secluded and rugged location and general proximity to the Texas and California Roads and the old Butterfield Stage Line, made it an ideal outlaw hideout for many years.

The cave itself lies hidden in a formation of sandstone hills and cliffs from 300 to 1500 feet in height. A fresh water spring flowed through it, providing water, and a natural stone corral at the base of the cliff held the outlaws' horses. A hidden exit allowed them to escape unnoticed.

Things to do Natural Attractions near , OK