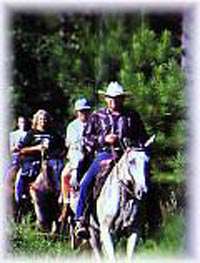 For those who want to explore on horseback, Robbers Cave State Park has nearly 50 miles of marked trails. The equestrian campground offers riders a place to camp and tie their horses after a day of trailriding. Starr D Outfitters and Riding Stables, located in the park, has horses for rent and organizes outings including trail rides, chuckwagon rides, and overnight camping trips.

Things to do Equestrian near , OK