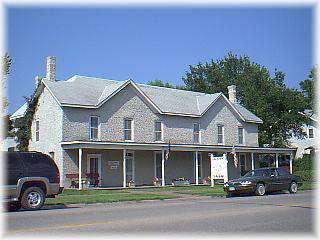 The Historical Walkway includes an original Pony Express station which is furnished as it would have been during the days of the Pony Express, as well as an antique church by the park, a 100-year-old pioneer school house, and the Hendee Hotel. The heir to the Henri estate, Janet LeClair, from New York City, has become extremely interested in the museum and has donated a number of items. In 1988, Mrs. LeClair donated an original Henri painting to the Museum from her personal collection. It is one of the largest works he ever did, measuring 7 1/2' by 4'. We are also fortunate to have three original sketches by Henri, as well as a number of prints of his paintings.


Garden tour in July, and celebrating the holidays the first Saturday in December. Open Memorial Day - September 30 Monday - Friday 10 a.m.-5 p.m. Saturday, Sunday, evenings and holidays by appointment. During the rest of the year call for an appointment at (308) 784-3583 or (308) 784-2671. Handicapped accessible to first floor

Things to do Museums near Cozad, NE