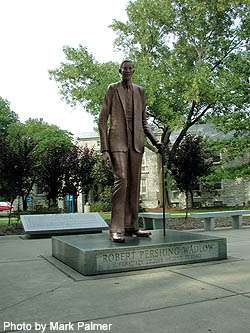 Robert Pershing Wadlow (February 22, 1918 - July 15, 1940), according to Guinness World Records, is the tallest man in medical history for whom there is irrefutable evidence. He is often known as the Alton Giant. Wadlow reached an unprecedented 8 ft 11.1 in (272 cm) in height and weighed 439 lb (199 kg) at his death. His great size and his continued growth in adulthood were due to a tumor within his pituitary gland. He showed no indication of an end to his growth even at the time of his death.
Early life

In his time, Wadlow was among the most popular of American celebrities; he was well-known due to his 1936 U.S. tour with the Ringling Brothers Circus and his 1938 promotional tour with the INTERCO. He continued participating in various tours and public appearances.

On July 4, 1940 Robert was hospitalised while making a professional appearance at the National Forest Festival; a faulty brace had irritated his ankle, causing a blister and bad infection. Doctors treated him with a blood transfusion and emergency surgery, but his condition worsened and on July 15, 1940, he died in his sleep.

Around 40,000 people attended Wadlow's funeral on 19 July. He was buried in a half-ton coffin that required 12 pallbearers to carry, which was interred within a vault of solid concrete. It was believed that Wadlow's family were concerned for the sanctity of his body after his death, and went to these lengths of security to ensure he would never be disturbed or stolen.

Gigantism, the disorder from which Wadlow suffered, usually involves only the lower extremities, so that in most cases the head and trunk are of more or less normal size while the lower torso and legs attain extreme proportions. This is similar to the opposing condition of Dwarfism, in which the lower extremeties tend to be underdeveloped yet the upper body remains relatively normal.

Robert Wadlow had a pituitary gland tumor that secreted large amounts of growth hormone resulting in acromegalic gigantism. Death is usually a result of heart complications due to the large volume of blood needing to be circulated.

- From Wikipedia, the free encyclopedia

Things to do One Of A Kinds near Alton, IL