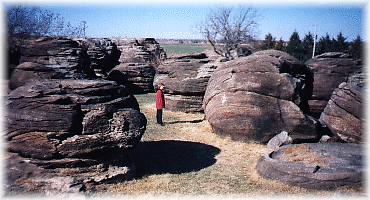 The rocks at Rock City are huge sandstone concretions in an area about the size of two football fields, 200 rocks--some as large as houses -- dot the landscape. There is no other place in the world where there are so many concretions of such giant size.

ROCK CITY IS UNIQUE IN THE WORLD

Rock City is not a highly developed tourist attraction. Basic improvements, such as a rod and the information center, have been made by Rock City, Inc., the protector and guardian of this geological treasure. Except for these modern conveniences to enhance your visit, Rock City is basically as it has been for thousands of years. The surface of the rocks is fragile and particularly susceptible to human wear. view the rocks with appreciation and wonder.

SCIENTIFIC EXPLANATION - Although concretions occur wherever there is sedimentary rock, the rocks of rock city are remarkable because of their great size and large number. What is the origin of the rock City rocks? Geologists are in general agreement that they were formed millions of years ago in Dakota Sandstone, which had been deposited when areas of Kansas were covered by an inland sea.

Although the greatest attraction of rock city centers around the giant concretions, the vegetation and animals of the park and immediate vicinity are also of great interest.

Most of the plants here are native to the area, although there is some evidence of seeds introduced by the many automobiles driven in by visitors from various sections of the country. Gramma and buffalo grasses from the predominating vegetation. Perhaps the most outstanding feature of the flora is the presence of at least two species of mosses, two of liverworts and two of ferns, plants which are normally associated with more humid regions. At least 74 flowering plants grow among the concretions.!

Birds are numerous in the Park. Do take time to hear their songs and try to spot them in the trees.

Quiet observation will off a glimpse of a ground squirrel, lizard or cottontail rabbit.


Come visit us in Minneapolis, Kansas

The Ottawa County Historical Museum features many outstanding displays. One of the world's premier George Washington Carver exhibits resides within the museum. Also included is an excellent military exhibit - one of the best anywhere. There is an interesting dinosaur exhibit relating to

The rocks at Rock City are huge sandstone concretions in an area about the size of two football fields, 200 rocks--some as large as houses -- dot the landscape. There is no other place in the world where there are so many concretions of such giant size.

George Washington Carver made Minneapolis, Kansas his hometown from 1880-1884, when he graduated from Minneapolis High School. This famous scientist who lived here and invented over 300 uses for the peanut, sweet potato, soy beans, and pecans, is best remembered for the one thing he did not invent:

For updates or $ changes go to -- www.minneapolis-ks.com/2172/Markley-Grove-Park In November of 1910

To Minneapolis calendar of events

Things to do Natural Attractions near Minneapolis, KS

These old Indian drawings can be found on the west shoreline of Wilson Lake carved in the Dakota Sandstone. It is impossible ...