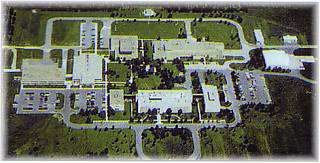 Scientists at the Roman L. Hruska U.S. Meat Animal Research
Center (MARC) develop new technology in order to increase the
efficiency of livestock production and benefit consumers. The
MARC was authorized by Congress on June 16, 1964, to work on problems facing the livestock industry, and
development began in the spring of 1966 on 35,000 acres near
Clay Center, Nebraska. The RLHUSMARC has made major contributions in the field
of genetics, breeding, nutrition, biological engineering, production, and animal health. Adjacent to this center, the University of
Nebraska also located a research station. The South Central Station provides specialized assistance to extension programs and
conducts research on crops and irrigation. Presently, research programs are using a
female breeding population of 6,500 cattle of 18 breeds, 3,000
sheep of 10 breeds, and 700 swine litters per year.

The MARC is
administered by the Agricultural Research Service (ARS) within
the United States Department of Agriculture (USDA). People from all over the world now visit the research facility which is located on the property of the former Naval Ammunition Depot built just west of town to produce
bombs and shells during World War II. On
October 10, 1978, President Carter signed into law a bill which
renamed the research facility after former Senator Roman L.
Hruska of Nebraska. Things to do Research Centers near Clay Center, NE