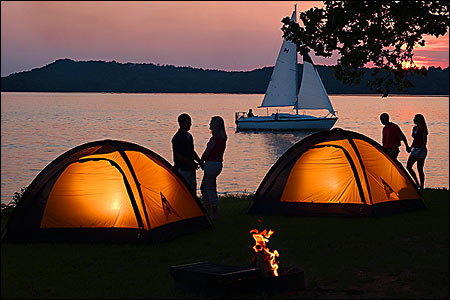 Russellville, overlooking 34,000-acre Lake Dardanelle and the Arkansas River, is a key city along Scenic Highway 7. Established in the 1840s, the town became the Pope County seat of justice in 1872. Interstate 40 skirts Russellville to the north. Lake Dardanelle is renowned for its bass fishing and a state park has two locations providing everything needed for an enjoyable outing. Also, the Arkansas River Visitors Center offers interpretive exhibits about the river's navigation system. Mount Nebo State Park, 10 miles southwest, is a Civilian Conservation Corps-built recreational facility with spectacular views of the River Valley. Arkansas Tech University provides cultural and sporting events throughout the year.

186 acres of wetlands and low woods provide an ideal habitat for a wide variety of wildlife. Nearly six miles of trails wind through the sanctuary providing a multitude of recreational opportunities such as walking, jogging, nature photography, and nature study.

One of the most scenic drives in the country, Scenic 7

Regional museum with aspects of local history; exhibits on the people (including Native Americans) and events of the Arkansas Ozarks and the Arkansas River Valley; slide show and tour presentations available with reservations.

"Renaissance of a River" interpretive exhibits chronicle the development of the river; managed by the U.S. Army Corps of Engineers.

To Russellville calendar of events

Things to do near Russellville, AR

As the Arkansas River flows through the state, it reaches its northern-most point in a sweeping bend. Now a part of Ozark Lak...

Occupied in April of 1891, the Sebastian County Quorum Court had the two-story solid rock building constructed as a "holding ...