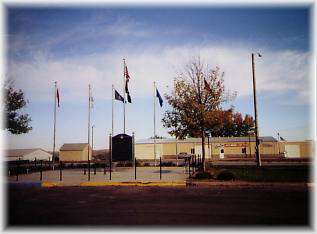 On the night of June 2, 1969, while on maneuvers in the South China Sea off the coast of Vietnam, the Australian aircraft carrier, Melbourn, was in collision with the destroyer, USS Frank E. Evans. The impact cut the Evans in two, the bow section sinking almost immediately. Seventy-four American seaman were lost, including three brothers from Niobrara, Nebraska: Gary, Gregory, and Kelly Sage. The brothers, 22, 21, and 19 years of age respectively, were the sons of Mr. and Mrs. Ernest Sage, and had been stationed together aboard the Evans at their own request. This tragedy was perhaps the greatest single loss sacrificed by any Nebraska family of the many who have contributed their sons to the service of the Nation.

At memorial services in Niobrara on June 11, 1969, the Governor of Nebraska eulogized the brothers saying that "Every generation of Americans has answered the call to the colors ... So it was with the Sage brothers who were serving in the finest tradition of the American fighting man. In the truest sense, they gave up their lives that we might continue to enjoy the fruits of freedom ..."