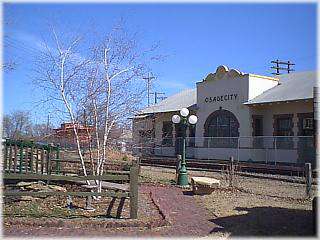 Depots have an architectural style all to themselves. They come in different sizes, but basically, they were all working structures and all served to expeditiously move passengers and freight. While somewhat removed from their previous role, today, railroad depots are once again emerging as community centerpieces. After years of neglect, the buildings are being reclaimed, and now enjoy new lives as retail centers, museums, and even transportation centers.

The east entrance to the Santa Fe Depot in Osage City, exhibits the definitive southwest design motif, recalling in the depot's design the southwest's influence on many of the Atchison, Topeka & Santa Fe Depots. Located on its original site, adjacent to the Santa Fe Tracks in downtown Osage City, the historic depot listed on the National Register of Historic Places, still receives passengers one weekend a year as passenger trains arrive from the Labor Day Weekend Railroad Days Celebration in Topeka, Kansas.

We currently do not have any events for Osage City, Kansas in our database. If you know of events taking place, please add the event
.

Things to do Museums near Osage City, KS