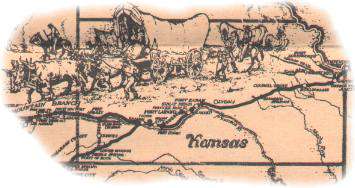 Marker Cottonwood - This giant cottonwood tree, believed to be more than 200 years old, served as a marker to guide travelers to the upper crossing of the Arkansas River.

Upper and Lower Crossings of The Little Arkansas River - Early travelers described this stream as being ten feet wide with banks fifteen feet high. A very difficult stream for wagons to cross.

Stone Corral Site, Camp Grierson - All signs of the corral are gone. This 200 by 300 foot stone enclosure, having walls eight feet high and 30 inches thick, was an over-night camping spot for trail travelers. There was a trading post here and military troops were stationed here in 1865 and 1867. Camp Grierson was occupied from June to November of 1867 by Company C, a black troop of the 10th Calvary, known as the Buffalo Soldiers, commanded by Captain Edward Byrne.

Cottonwood Grove Cemetery - Sixteen soldiers, victims of cholera and Indian battles, were buried here. The bodies were removed to a Fort Leavenworth cemetery in the 1880s. The old grave sites are still visible.

DAR Markers - There are a total of eight DAR markers in Rice County. Three are near the Stone Corral site, one a half mile west of the Jarvis creek crossing, one south of Lyons along K-14 K-96, one near Buffalo Bill Mathewson's well, one south of Chase and one at Ralph's Ruts.

Rifle Pits - Shallow depressions near Cottonwood Grove Cemetery which were once rifle pits or entrenchments used during the times troops were stationed at the Stone Corral.

Jarvis Creek Crossing - In this area a prominent Mexican trader, Don Antonio Jose Chavez, was robbed and murdered in 1843. This incident, the murder of a Mexican citizen in United States territory, threatened to disrupt the Santa Fe trade. Jarvis is a mispronunciation or misspelling of Chavez.

Little Cow Creek Crossing - Some wagon trains camped overnight here, although the usual practice was to camp at the Cow Creek crossing.

Historic Sign and Father Padilla Cross - This cross was erected in 1950 by the Kansas Knights of Columbus to honor Father Juan Padilla who accompanied Coronado to Kansas in 1541. He returned in 1542 for the purpose of bringing Christianity to the Indians and was killed when conflict arose between two Indian groups.The cross also symbolizes the first cross placed on the Great Plains by the Conquistadors for Father Padilla over 70 years before the Pilgrims landed in the New World. Located 3 miles west of Lyons on US 56.

Cow Creek Crossing - This crossing was adjacent to the south side of the present bridge one mile south of the Father Padilla Cross. There was a toll bridge about 150 yards upstream during the 1860s.

Buffalo Bill Mathewson's Well - In 1863, "Buffalo" Bill Mathewson opened a trading post next to Cow Creek Crossing. His hand-dug, 34 foot deep, stone-lined well that served the U.S. Calvary and Santa Fe Trail travelers has been preserved at this site. It is believed that the well was named after Mathewson after his heroic deeds in saving lives during Indian attacks in the area. One cowhand on the early ranch was young Bill Cody.

Commercial use of the Santa Fe Trail closed in Kansas in 1872, having been replaced by the railroad. Located 3 miles west of Lyons on US 56 and 1 mile south.

Wagon Train Seige Area - The area just west of Cow Creek was a favorite over-night campground. Several important battles with Indians occurred here. One of particular note occurred in 1864 when a military supply grain was pinned down by Indians for six days. The critical item was water - after the third day the men dug a well which was actually seepage from the creek.

Trail Ruts - Trail ruts can be seen near Prairie Dog Creek, in a pasture on teh north side of US 56 at a point 2.1 miles west of Chase, at Ralph's Ruts and also near Plum Buttes.

Plum Buttes Massacre Site - It was here that the wagon train of trader Franz Huning was attacked September 9, 1867, by a band of Indians led by Charley Bent, half-breed son of William Bent of Bent's Fort.

Ralph's Ruts - These are among the most prominent trail ruts to be found anywhere. They have become known among trail buffs as Ralph's Ruts.

Plum Buttes Site - There were three large sand dunes which are said to have been 80 to 100 feet high. This was usually the noon stop and was a landmark that could be seen after crossing Cow Creek. Shortly after the Trail closed, the wind, which was their builder, began their reduction; only small, grassed-over dunes remain.

Things to do Tours near Lyons, KS