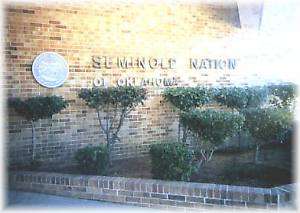 The original Muscogee language is still spoken by many Seminole elders, but is slowly fading away, possibly due to the younger generation's lack of interest in the language. However, this may change as efforts are being made to implement the language into the public school system, where it can be learned by young children.

POLITICAL CULTURE: The Seminole Tribe of Oklahoma consists of fourteen individual bands or groups, two of which are Freedmen bands (descendants of slaves who found refuge and freedom with the tribe before the tribe's removal from Florida).

Individuals are inherited into their respective band through their mother (they must be a member of the band their mother belonged to). Each band has an elected Chairman and Vice Chairman. Each band meets once a month to discuss tribal matters of importance.

All final decisions regarding the tribe (economic development, social programs, activities, employment opportunities, etc.) are the responsibility of the General Council, the governing body of the Seminole Nation. The General Council consists of two representatives of each band, who are elected by vote of the members of their band. The General Council holds quarterly meetings to discuss tribal matters and vote on matters that need their approval or disapproval. Special meetings are called if a decision is needed right away.

RELIGION AND SCHOOLS: The Seminole Nation is divided into two religions, Christianity and Traditional. Christianity is the acceptance of Jesus Christ and the development of his teachings into our daily lives. There are several Seminole Indian churches in our area for worship.

Traditional religion is the stomp dance. The stomp dance is derived from the Green Corn Dance, which was brought over by the Five Civilized Tribes during their removal from Florida.

Seminole children attend public schools where efforts are being made to bring more Indian culture and language in the schools.

GEOGRAPHICAL LOCATION & POPULATION: The Seminole Nation boundaries include areas scattered throughout Seminole County, one of the most economically depressed counties in Oklahoma. The tribal headquarters are located at Wewoka (meaning Barking Waters), which is the county seat of Seminole County.

The Seminole Nation currently has around 12,000 enrolled tribal members, of which about 60 percent live within or near the Seminole nation boundaries. Except for about 700 not living in Oklahoma, the remainder live in other parts of the state.