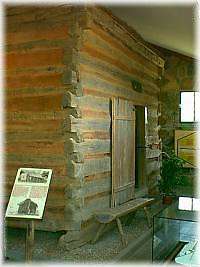 The cabin and surrounding grounds became the property of the State of Oklahoma in 1936. Shortly thereafter, The stone cover building and walls were built entirely around the cabin by the Works Progress Administration to ensure the preservation of this monumental historic landmark designated by the Secretary of the Interior as a National Historic Landmark.

The grounds are maintained with picnic facilities, restrooms, playground areas to accommodate group tours and outings for school groups.

Also at the site is an information center, a small historic cemetery, a salt works display, and a bronze statue of Sequoyah, the educator and teacher.

Things to do Landmarks near Sallisaw, OK