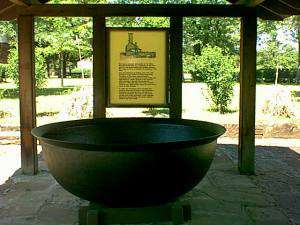 Salt was obtained by boiling water from salt springs in large kettles set atop wood-fired furnaces. As the water evaporated, the crystalized salt was ladled out of the kettle and deposited on a lower portion of the furnace. After cooling it was put into barrels for shipment. Although most salt made in Indian Territory was used locally, some was sold as far away as New Orleans.

In 1828, the Cherokees were removed from western Arkansas to present day Oklahoma. Sequoyah, in exchange for a salt works he owned in Arkansas, was given a salt spring located nine miles northeast of his homesite.

Sequoyah operated this salt works until his death in the 1840s.

We currently do not have any events for Sallisaw, Oklahoma in our database. If you know of events taking place, please add the event
.

Things to do Ethnic Heritage near Sallisaw, OK