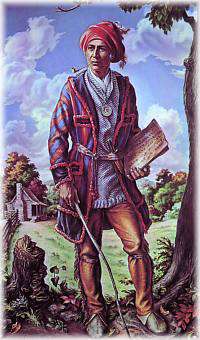 Though lame in one leg from the time of his youth, as an adult Sequoyah became known as a skilled blacksmith and silversmith and for his drawings and paintings. No known examples of his art work exist today. Sequoyah married several times and fathered many children. He and his last wife, Sally, moved to Willis Valley (Alabama), where Sequoyah operated a trading post used by both Cherokee and whites.

Sequoyah was intrigued with the fact that white men could convey messages by use of writing or "talking leaves." In 1809, Sequoyah began experimenting with a written alphabet for the Cherokee language. At first he tried to use a different symbol for each word of his language. This, however, proved impractical.

After many years of experimentation, Sequoyah came to realize that the Cherokee language is composed of a set number of recurring sounds. With this insight it was possible for him to identify and create a symbol for each sound, thus producing a syllabary rather than an alphabet.

During the twelve-year development of the syllabary, Sequoyah endured much ridicule from family and tribal members. Regardless of this response he continued his work and in 1821 completed the Cherokee Language syllabary.

The first person he taught to use the syllabary (A-ga-yuh) was Ahyoka, his daughter. Skeptical members of the tribe were won over when they were shown that Sequoyah and his daughter could communicate, even when separated, by reading the written messages composed from the syllabary. The teaching of the syllabary was begun and as its use spread, Sequoyah became esteemed as a knowledgeable and respected man.

Departing his eastern home in 1818, Sequoyah operated a salt production and blacksmith works near present day Russellville, Arkansas. In 1828, Sequoyah was designated part of a delegation sent by the Arkansas Cherokee to Washington to make a treaty to exchange their lands for lands in the present state of Oklahoma. Following his trip, Sequoyah determined to trade his land and salt works for like property in present day Oklahoma. He and his family located on Big Skin Bayou Creek in what is now Sequoyah County.

Sequoyah knew from tribal folklore of a band of the Cherokee that had moved west of the Mississippi before the American Revolutionary War. In the spring of 1842, Sequoyah decided to travel to the southwest in the hopes of locating these other Cherokees. He apparently hoped to convince them to return with him to the new tribal lands. Though Sequoyah succeeded in locating this band in 1843, during the journey he became ill and died in August of that year near San Fernando, Mexico. his exact burial place is unmarked and unknown to this date.

Sequoyah's fame as the inventor of a nation's written language has become worldwide. He was selected as one of Oklahoma's two greatest men in the National Statuary Hall of Washington D.C.

Things to do Famous People near Sallisaw, OK