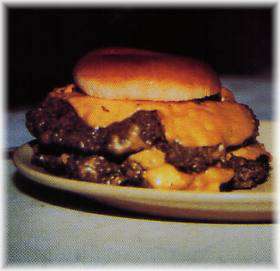 Once upon a time, in the faraway village of Harrison, there was a food palace name Sioux Sundries. In this palace there lived a good and wise monarch of cooking, Queen Wasserburger. Outside of Harrison, in the wider kingdom of Sioux County, there lived a gentle giant, Rancher Coffee. Many stout-hearted men were employed by Rancher Coffee, but every day the men got very hungry and became very tired. The kind rancher tried everything he could to fill his hungry men, but try as he might, he couldn't satisfy them.

One day the enchanted jackelope of the Pine Ridge whispered into Rancher Coffee's ear, "Take your hard-working men to the palace of Queen Wasserburger." Rancher Coffee took his advice, and when he got there, he decreed, "Puny hamburgers will not do. Fix my hungry men the biggest and best burgers in the land."

So Queen Wasserburger did. Each burger weighed twenty-eight ounces, measured si inches across, and spilled out all around the regular-size buns. She topped them off with onion, pickle, lettuce, cheese, mustard and catsup ... an a bag of cholesterol-free chips.

Rancher Coffee and his men ate and ate and ate, but they were unable to finish the huge burgers. They thanked the queen and walked out filled with renewed energy. From that time forward, Rancher Coffee brought his men back to the palace every day to enjoy the giant burgers. News spread across the land, and the palace became famous for its giant "Coffee Burger." Rancher Coffee, the hard-working men, and Queen Wasserburger lived happily ever after.

Today the guest book at Sioux Sundries includes signatures from all fifty states and fourteen foreign countries. For an eatery in a town of nearly 400 located far from major population centers, that's quite an accomplishment. Plaques on the wall include the state tourism award and the Beef Backer Award from the Nebraska Beef Board. Sioux Sundries has been mentioned in USA Today,Stars and Stripes, and other publications and featured on Charles Kuralt's "Sunday Morning" CBS.

Located on a corner of the main street, Sioux Sundries doesn't look like a restaurant. It isn't. It's a store where you can buy toothpaste, shampoo, bag balm, duct tape, kitchen knives, toys, graduation presents, diapers, photo albums, key rings, magazines, rain bonnets, videos, romance novels (new and used), and short-order meals. It's an antique Stop-and Shop. If they don't have it, you don't need it!

The food can be found at the back in a tiny space large enough for five booths and a chrome-and- formica soda fountain counter. The Coffee Burger is excellent - well seasoned, flavorful, and not greasy. What is the secret of the burgers? The waitress claims it's the freshness of the meat and admitted the size may add some novelty. "There may be a bigger burger somewhere," she said, "but until we find it we're going to bill it as the largest!"

Things to do One Of A Kinds near Harrison, NE