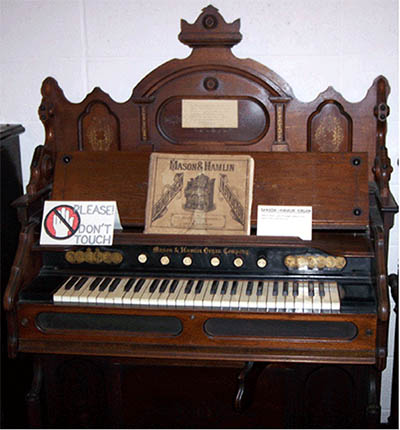 The collection at the Smith-Zimmerman Museum primarily reflects the ethnic groups who settled Lake County. Many artifacts in the Museum were brought with these early pioneers or purchased by them in the late 1800's and early 1900's. The artifacts include household articles, period clothing and war memorabilia. Display areas cover

One of the area displays in the Museum is a bedroom that is typical of the settlers in the 1880's. The armoire was brought to Lake County in 1881 by the D.D. Holdridge family who settled in the Madison area. The matching walnut bedroom suite was donated by George Smith. It consists of a bed, a marble-topped dresser and commode. They were used in Madison by the Northy family.
From Egan Avenue it is the third building east of the Karl Mundt Library.

In another area is a range of early transportation from the first covered wagon to come to Lake County, the 1920 Oldsmobile driven by the Smith Family, to a 1959 Hennery Kilowatt. One of about 120 of these cars made.

A lifelong resident of the Madison, South Dakota area, John C. Green has earned recognition in the art community through his faithful rendition of outdoor and scenic images that capture the spirit of his native state. He is an established artist with superb credentials. He recently celebrated his 30

Lake Herman State Park is located on a peninsula of the 1,350

To Madison calendar of events

Things to do Museums near Madison, SD

Take a step back in time as you enter the Dakota Territorial Museum. The museum holds a large collection of rare memorabilia...

The USS South Dakota was the most decorated battleship of World War II. It served in every major battle in the Pacific from 1...