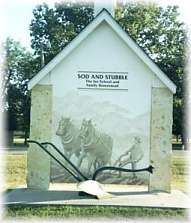 Three miles northwest of the city of Downs is located the site of the 1871 homestead of immigrant Henry Ise. In 1873, Henry married seventeen-year old Rosa Haag of Holton, Kansas and brought her west to live. Twelve children (five girls and seven boys) were born on this homestead in the 27 years preceding Henry's death in 1900. Nine years later, Rosa moved with her family to Lawrence, Kansas where she died in 1947.

The Ise farm also served as the location of the rural New Arcadia Post Office (1874 -1879), and the still-standing one-room frame Ise School, District #37, which closed in 1946.

Son John Ise went on to publish his parents' story in 1936. Called "Sod and Stubble," this classic tale of homesteading on the Great Plains recounts the years of struggle and hardships the family and their neighbors endured to transform the virgin sod into productive farms of corn and wheat.

In honor of the 70th anniversary of the book's initial publication, the Sod & Stubble Country Self-Guided Tour was dedicated in September 2006. This 15-mile, 22-stop auto & bicycle tour features 19 interpretive markers and honors many of the sites and people made famous in Ise's internationally-respected book. A map brochure of the tour is available. All non-paved roads; inquire locally about road conditions.

From the highway intersection of US-24/State 9 & State 181 at the northern edge of Downs, go west one mile, then north one mile, then west a half mile to start of tour.


Come visit us in Downs, Kansas

The Lipton Hotel was built in 1880 and is still standing. It once sheltered dignitaries and politicians. Today it houses one of the areas finest gift stores on the street level and some of the old rooms upstairs have been converted into modern apartments.

The Railroad Gazebo, located in the railroad park, is a replica of the original gazebo and continues to serve as a focal point for community events, just as it did in the late 1800s.

Three miles northwest of the city of Downs is located the site of the 1871 homestead of immigrant Henry Ise. In 1873, Henry married seventeen-year old Rosa Haag of Holton, Kansas and brought her west to live. Twelve children (five girls and seven boys) were born on this homestead in the 27

The Downs Unplugged Coffeehouse presents amateur and professional artists the second Saturday of each month starting at 7:30 p.m. until 9:30 p.m.. Enjoy comedy, music, and theater! "Unplugged"

The Downs Cemetery is located along Highway 24

To Downs calendar of events

Things to do Pioneer Life near Downs, KS

Higley Cabin - "Home on the Range"