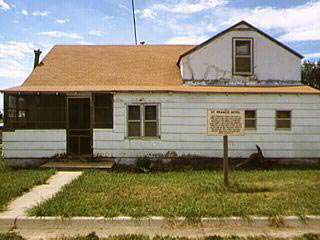 The St. Francis Hotel is a significant example of the businesses in Nicodemus during its era of great prosperity. Built in 1881 by Zach T. Fletcher, the St. Francis Hotel was a one-and half story limestone structure, rectangular with a one-story shed roofed kitchen to the east. The hotel once was advertised as "in first-class order, prepared to furnish the best accommodations to the traveling public." The limestone portion of the hotel contains two bedrooms on the first floor and two on the second floor with living and dining rooms on the first floor. Zach T. Fletcher, with his wife Jenny, operated a post office, a school and a stagecoach station out of the hotel. The Fletchers added a new roof in 1887. Ownership of the St. Francis Hotel would change and there were new additions added through the years.

After the railroad failed to come to Nicodemus, Fletcher sold the hotel to W. R. Hill, but continued to run the hotel. Later the hotel reverted to Graham County. During the 1920's Fred Switzer, a great nephew of the Fletchers, purchased the hotel from Graham County. He and his wife Ora Wellington made the hotel their home. The Switzers made some changes during the 1920's and 1930's by constructing new additions and relocating older wood frame parts.

The hotel underwent more changes during the 1950's and 1960. A family-style restaurant catering to local residents and area farmers was operated out of the Hotel. Stucco was applied to the exterior. A third bedroom was created over the kitchen and dining room by building a half-story roofline. This caused the east wing to be the same height as the roof over the limestone portion. Front and rear porches and a wood frame shed roof front were added to the north and southeast. Addition changes included a storage room and entry. The St. Francis Hotel would remain under reconstruction as late as the twentieth century.

In the summer of 1998, the hotel underwent further changes. A shed roof over the southwest corner bedroom and the back porch was reconstructed joining the two structures, which at one point were at slightly different slopes. The reconstructed roof consists of a single roof across the entire south portion of the building covered with rolled asphalt. Some roof rafters were replaced and the rest of the roof was re-shingled with asphalt shingles.

The hotel is currently a private residence and is unoccupied and is preserved as a National Historic Site by the National Park System.

Admission: Free Admission
Hours: Free Admission
Address: Washington Street
Phone: 785-839-4233
Our Website:www.nps.gov/nico
The Visitor Center is closed on Thanksgiving, Christmas Day, and New Years Day. Please contact us prior to your visit to confirm Visitor Center operational hours to ensure that you will not be disappointed.

Things to do Historic Hotels near Nicodemus, KS