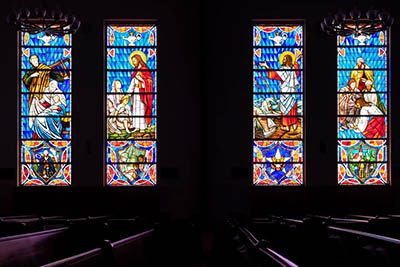 Historical Marker (1967) -
"Rich in the tradition of the early frontier this historic shrine, which was built as the Church of St. Ignatius, has had a great influence on the religious life of the Command from the days of the troopers of saddle, saber and rifle to the nuclear scholar and student of present times.

From its earliest foundation in 1827 the Archives of Fort Leavenworth identify an illustrious list of courageous Jesuit missionaries, Benedictine monks, U.S. Army chaplains and other distinguished soldiers who have contributed immeasurably to this glorious heritage. To these noble soldiers of God and Country this historic marker is dedicated."

Entrance to the Fort may be restricted.

The Stone wall behind and across the street from Grant's statue is a favorite with photographers. The wall was restored in the early part of this century by the Daughters of the American Revolution.