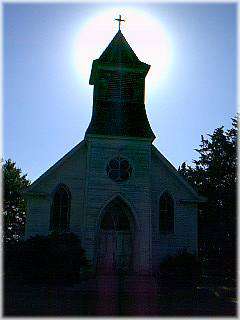 St. Martin's Catholic Church was designed by architect James H. Craddock in the Gothic Revival style and was erected in 1907-8. Listed on the National Register of Historic Places, the property located north of the present town of DeWeese is owned by the Clay County Historical Society. The interior of the church remains intact with all of the original furnishing still in place. Each year numerous requests to tour the church are received and visitors enjoy its peace and historical value in the settling of Clay County. With pride in the past, worship at St. Martin's became a beloved memory for the parishioners.

The original parishioners of St. Martin's Church came to this southwestern part of Clay County in the 1880s from Moravia, a part of Austria-Hungary at the time of Czar Francis Joseph. They came from the Villages of upper and lower Loucky, thus naming this community where they settled, "Loucky" - meaning meadows.

The first Masses were held in the sod houses and dugouts of Bednars, Vaps, and in a country school house District 27, Blue River, with a Czech priest, Father Phillip Maly, coming once or twice a year from Iowa to have Holy Mass and serve them the Sacraments. In the early spring of 1899, a woman (Frantiska Sebek) donated her farm home to be used as a chapel. They named their rural church St. Martin's after the patron saint of farmers, Martin of Tours, a monk who was maneuvered into being a bishop, a bishop who fought paganism as well as pleaded for mercy to heretics. Earlier in 1893, a group of Czechs living in the neighborhood of Loucky met and organized the Roman Catholic Cemetery Association. The only membership requirement was the payment of five dollars, which gave the member a burial plot and mutual care of the cemetery. Today a history of the past can be revered at the historic cemetery located just north of the exciting church with the gate reading CESKO KATOLICKY NAGITSY.

By 1906, with a congregation of more than 100 parishioners, a larger church was needed and construction was begun in the fall of 1907. When a strong December wind blew the partially constructed building down, construction was delayed until the spring of 1908 when it was then completed in the fall. It is believed that the first Holy Mass was said in the new church on Christmas Day of 1908. The Mass was always in the Czech language until the 1940s when the English Gospel was read.

On January 6, 1909, on the Feast of the Epiphany or Three Wise Men's Day, five men went from farm to farm in sub-zero weather to collect money to buy a church bell. Each and everyone they contacted donated money according to his means. Three of the men portrayed the Three Wise Men and when they entered a home they would swing a song about the three wise men and then ask for a donation to the bell fund. Before they left the house they wrote with white chalk the letters K-M-B (for Kasper, Melichar, Baltazar, the three men) above the door.

Donations by parish members furnished the interior of the church with statues of St. Cyril and St. Mathodius, two side altars with the north one opening at the base to reveal Christ's sepulcher, altar angels, the statue of the Infant of Prague, the angel holy water font, the missal and candleholders, and a pump organ.

Due to the dwindling of parishioners, St. Martin's Church was closed after Sunday Mass on July 1, 1973 and deeded to the Clay County Historical Society for restoration and preservation. Now the two parishes, St. Martin's and Assumption were joined together to look forward to the future.

Address: North of the town of DeWeese at the historical marker, then turn west at the next road for approximately 2 miles. Things to do Historic Churches near Clay Center, NE