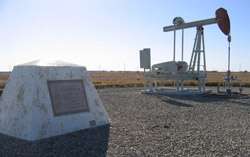 El Dorado became, for a while, the world's storybook oil field. Butler County encompassed 1,800 producing oil wells on 25,000 acres. The El Dorado Field is a story of men and events that helped Kansas and the nation emerge from the draft-horse and kerosene-lamp years into the gasoline age. "Few events in oil history had such lasting effects on petroleum technology, on the course of world history and on the general economy, local, state, and national as that of the El Dorado Field."

Since 1860 geologists, investors, and business leaders had been looking at the potential for oil and gas discoveries west of the Mississippi.

Interest focused on Butler County, Kansas in 1915 when geologists, hired by Cities Service, came to the area. They located a well-marked anticline which they were able to follow southwest over the hills and across the Walnut Valley. With map in hand, the geologists convinced Cities service to lease 30,000 acres (approx. 34 sq.miles) and selected the Stapleton farm as the starting lease. On September 29, drilling contractors, Golden and Obins spudded Stapleton #1. Oil was discovered on October 6, 1915 at a depth of 2,497 feet and our history was changed forever. Stapleton #1, the discovery well for the great El Dorado Field, became the most notable of all regional wells because it was located by scientific methods. It dawned on oil people that an unprecedented and utterly remarkable pinpointing had resulted from this geological work. Not only was oil found within the geologists recommended area, it was found on nearly every acre of that area, and almost none was found directly outside that area! It was shocking to the oil industry. The largest, formally organized industrial geological operation in history was launched.

The Stapleton discovery brought big changes to El Dorado and to the entire Butler County region. Land and the price of leases began to soar. At the time of the Stapleton strike the average lease was $1.00/acre. By 1916, leases went for $25.00 an acre and continued to rise to $3,750.00 an acre! Standard lease agreements between land owners and oil companies stated that 1/8th of the earnings from the gas or oil that was found would be paid to the land owners. To understand the vast amount of money that could be made, the following transaction was recorded. "Recalling that on April 20, 1916, the three land owners received their first royalty check in the El Dorado Field, each received $1,002.25 for payment of oil run from only March 15 to April 5, (21 days). Then after holding and developing the lease for a little over nine months, one owner sold his interest to Sinclair Oil Company for 1 million dollars!" (That equals to $5,000.00 per day earnings!)

El Dorado brought "Big Oil" with all its thrills and headaches to Kansas. In 1916, oil production in Kansas, with El Dorado and Augusta providing the bulk of it, was 1% of US production. By 1918, it was 12.8% of national production and 9% of world production with the El Dorado Field producing almost 29 million barrels of oil in a single year. The El Dorado Field became the leading single oil field in the United States.

Oil Hill was one of those lease towns complete with swimming pool, golf course, school, gymnasium, stores, cafe, post office and many other luxuries all for oil company employees. Oil Hill may also have been the only town of its size in the US without any form of municipal government. There was no need. The company provided all the necessary services. The population of Oil Hill grew almost overnight to approximately 2,500 people. Oil Hill, "the town that oil built," was reported to be the largest town completely owned by a single company in the entire world by 1919. But by 1957, Oil Hill, like all the other lease towns, was gone. All that remains today are the sidewalks peeking through the grass, abandoned flower beds, the foundations of some homes, a company garage, Quonset hut and company office that bear mute testimony to the great events which occurred there.

Where Special Events Happen El Dorado Lake is located just north and east of the City of El Dorado at the edge of the scenic Flint Hills. The lake has approximately 8,000 surface acres of water with 98 miles of shoreline. There are approximately 6,000

"Custom framing, original art, art reproductions and scroll saw hardwood gifts. Circle Gallery has served the custom framing needs in Butler County for over 33 years. From October through May the Gallery serves as the front door for the Iron Horse Concert Hall, a bluegrass and folk music venue. "

Things to do Historic Markers near El Dorado, KS