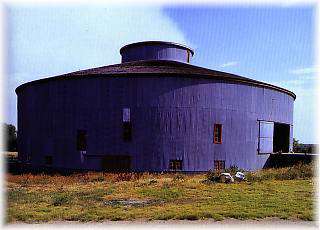 Nebraska's largest round barn and one of the nation's largest, was placed on the National Register of Historic Places in April 1972, and is still in use today.

It was built in 1902-3 by the four Starke brothers, Conrad, Ernest, Bill, and Chris, who came to Nebraska from Milwaukee. The massive structure measures 130 feet in diameter, with a center silo diameter of 28 feet, a height of 65 feet and has three levels: the bottom for animals, the second for machinery, and the third (or loft) for hay. The entire vertical frame of massive 12 x 12 timbers is held together combining construction methods of balloon framing and heavy timber supports using balanced tensions and stress rather than nails or pegs.