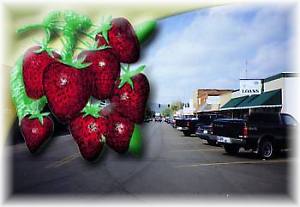 Strawberry Capital of the World!

A myriad of colors, from the redbud and dogwood in springtime to the lavish flora in autumn, blanket the Ozark foothills. Northeastern Oklahoma has an abundance of clear sparkling water. Together, these attributes help to make the Stilwell area a true scenic wonderland.

A major event of the spring season is Stilwell's Annual Strawberry Festival held the second Saturday in May. From a modest beginning in 1948, the Festival has grown to become a nationally known event with over 20,000 in attendance.

Stilwell has it all - fun, entertainment, relaxation, history, and may family-owned small shops staffed by friendly people to assist customers.

Come home to the peaceful atmosphere of Stilwell, Oklahoma. It's a neat place to be.

Arthur E. Stilwell, president of the Kansas City, Pittsburgh, and Gulf Railway Co. (Now the Kansas City Southern) is responsible for establishing the town of Stilwell. After several years of preparation and obtaining funding the construction started in the late 1880s and was completed in 1897. Arthur Stilwell decided to build north of the Sallisaw Creek instead of through the town of Mayes on the south side. That was a devastating blow to Mayes. With statehood in the offing and the closing of the Flint District courthouse merchants began to move to the New Hope area. The post office was moved to the Dannenberg Trading Post in 1894, and later to the new town of Stilwell. The flint Lodge was moved to the second floor of the trading post. When the railroad established its division point the new town began to rise along Front Street. Under the supervision of Mr. James Ross, the railroad built shops, office buildings, an iced house, a water tank, and a large turntable inside the round house. When the town received its incorporation grant on January 2, 1897, it was named Stilwell after the president of the railroad.

Things to do near Stilwell, OK