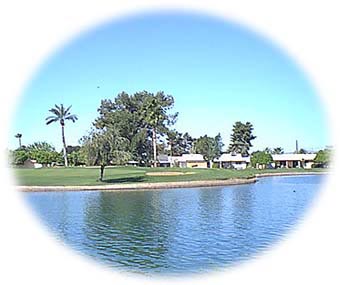 Sun City, Arizona means many things to many people, but all agree it is a place of cleanliness and friendliness, a wide variety of interests and activities - an ideal adult community - where all residents can be as active as they wish. The seven recreation centers, two bowling centers, eight golf courses, three Country Clubs, Sun Bowl, and Viewpoint Lake constitute the largest concentration of recreational facilities in the United States.

A sports enthusiasts, Del Webb's fame and fortune allowed him to sponsor Indianapolis "500" and Daytona race cars, as well as own the famed New York Yankees for a stretch. But build an entire community for a specific group of people? That was an entirely new concept altogether. Del Webb toyed with the idea of creating a self-sustaining community that would be all encompassing with affordable housing and recreation.

Despite a massive nationwide advertising blitz prior to the opening, company officials still had their doubts about the eventual success of their newest project. Would anyone show up on opening day? According to Webb records, over 100,000 visitors toured the new model homes during the first three days of the grand opening. Incredibly, 237 homes were sold during that first three-day weekend.

Sun City was an immediate and overwhelming success!

Sun City's initial success earned national attention. The community was highlighted in newspaper and magazine articles throughout the country, featured on the national news and profiled on TV shows. Del Webb was even featured on a 1962 cover of Time magazine. The Webb Company added recreation centers, golf courses and shopping facilities as Sun City grew.

Forty years later, Sun City is still best known for its volunteer spirit. The community remains unincorporated and has always depended on its own citizens for required services. Residents oversee the community's three most important civic groups: The Recreation Centers of Sun City, Inc., the Sun City Home Owners Association and the Sun City Taxpayers Association. As other needs for services arose over the years, Sun City residents were quick to organize and find solutions.

Sun and fun may have been the initial attraction to Sun City 40 years ago. But the strength of Sun City's residents and their enduring ability to take care of one another may be the key to the community's continued success � and the primary difference between it and all those since who have tried to imitate Del Webb's vision.

The Northwest Valley Theater is a preeminent community theater whose focus is to improve the quality of life for those we touch through unparalleled artistic expression in the performing arts.

We currently do not have any events for Sun City, Arizona in our database. If you know of events taking place, please add the event
.

Things to do near Sun City, AZ